Photo of Sixth St. north of Baum St. on the west side of Mt. Adams. This section of Sixth St. no longer exits, having been removed during construction of I-71 in the 1960's and 70's. What remained of Sixth was renamed Van Meter St. and a new section, south of Wareham, was added, connecting it to Baum St. The large building visible in the distance is the Whitaker Paper Co., which occupied the block between Eggleston Ave. and Lock St. (now gone), and from Fifth north to Sixth. Original photo 12-29-1939 by Nelson Ronsheim, F5.6 at 1/50 with yellow filter on XX film in Agfa 17. Scanned by Michael G Smith 2009. 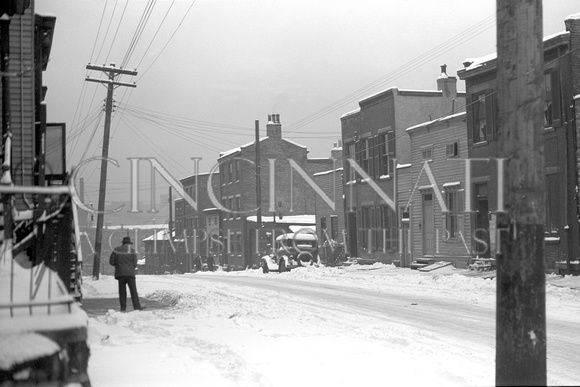