This classic image of Cincinnati’s Tyler Davidson Fountain captures a day in the life of the City Square in 1904. Mabley and Carew Department Store (known as Mabley’s) proudly stands on the right and the old Carew Building is seen straight ahead at the southwest corner of Fifth and Vine. The Carew Tower would eventually occupy this site as it does today. Notice that all in this shot are dressed sharply while sporting a hat, in direct contrast with the casual clothing styles of the present. The fountain is facing east toward Main Street, the heart of Cincinnati’s 19th Century economic power houses. Fountain Square would stand on this oval island between north and south Fifth Street from 1871 until 1968. At that time, the Square was enlarged and the fountain was moved slightly to the north and repositioned facing west. 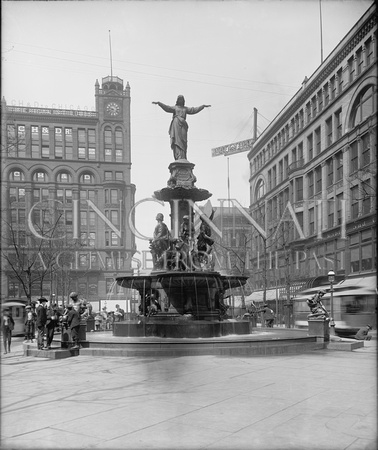