A vivid scene unfolds at Fifth and Race Streets in Cincinnati, Ohio at the turn of the Twentieth Century. Circa 1900, you are on Race, looking east down Fifth towards Fountain Square. On the northeast corner sits The Smith Kasson Department Store and the handsome Andrews Building occupies the southeast corner of Fifth and Race to your right. In the future, the Carew Tower would occupy the entire block on the right hand side. Potter’s Shoes is clearly seen on the left as is the old Mabley and Carew Department Store at Fifth and Vine. Note the presence of Streetcars along with horse and carriages and the Victorian era clothing being worn.
As Americans began moving into cities in mass numbers, Cincinnati and cities as a whole were experiencing rapid growth in their populations. 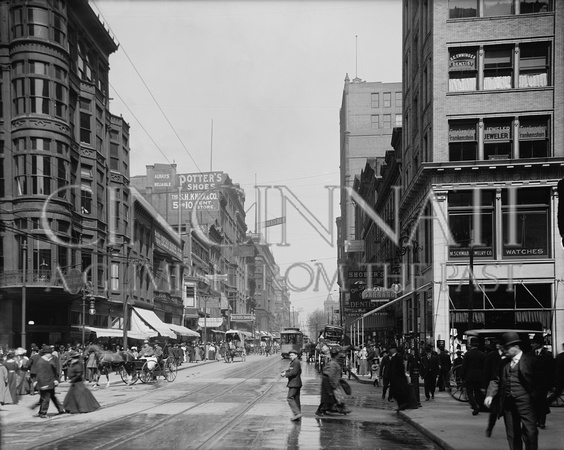